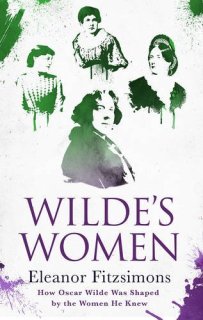 In this recent addition to the ever-growing Wilde bibliography, Eleanor Fitzsimons seeks to illuminate Oscar’s life and career by examining his association with the many women – a remarkable number of them distinguished and fascinating in their own right – who impacted on him along the way.  Wilde’s female friends were clearly enormously important to him, offering inspiration and support in good times and bad, while they, in turn, valued what one of them called the ‘pleasurableness’ of his company (p.304). Not all women who encountered Oscar, of course, liked or admired him, and not all of his female friends remained loyal in the face of his later vicissitudes, and these too find their place in this study.

As son of the formidably opinionated and unconventional Jane Wilde, Oscar had before him – literally from the cradle – an outstanding example of female autonomy and achievement. Inspired as a young woman by the Young Ireland movement and writing under the pseudonym ‘Speranza’, Jane’s inflammatory verse appeared in the nationalist periodical The Nation. As Lady Wilde, she won plaudits for her learning, was a prolific author and translator from French, Latin and German, presided over a literary salon in Dublin and later in London, and fiercely defended her husband in open court against allegations of sexual misconduct.   Resenting the ‘vacuity, inanity, vanity, absurdity and idleness’ foisted on women, Jane railed against their disadvantage before the law and the lack of alternatives to ‘commercial marriage’ (p.29). Later she would hail as an important milestone the passing of the Married Women’s Property Rights Acts. Yet there were contradictions in her thinking: ‘Nothing interests me beyond the desire to make him [her husband] happy’ (p.33), she declared – an attitude which Fitzsimons suggests may unconsciously have influenced Oscar’s own approach to marriage.

Constance Lloyd, who married Oscar in 1884, emerges here – as she evidently did in life – as a much more muted personality than her flamboyant mother-in-law.  Highly intelligent, accomplished and a gifted musician, she seems nonetheless to have lacked confidence: observers noted her shyness and lack of conversation in company. Yet she assiduously fostered Oscar’s career by acting as his hostess at their Tite Street home, while sharing with Jane a commitment to women’s issues, most notably through her involvement in the Rational Dress Society and the Chelsea Women’s Liberal Association. Rather unexpectedly, given her reputation for timidity, she proved herself an excellent public speaker: in 1888 she addressed the conference of the Women’s Committee of the International Arbitration and Peace Association, and in the following year won plaudits for her address on Irish home rule to the Women’s Liberal Federation. Humiliated by Oscar’s infatuation with Bosie and in increasingly poor health, she nonetheless supported him during the Queensberry libel trial. With his arrest and subsequent imprisonment, she found herself torn between compassion for her husband and a determination to safeguard the welfare of their sons. Her death in 1898 was, Ada Leverson, believed, Oscar’s ‘greatest blow’ (p.288), but, as Fitzsimons admits, it is difficult to imagine that any resumption of their marriage would ever have been possible, and her saddest epitaph is surely their son Vyvyan’s rebuke to those who accused her of humourlessness: ‘she may not have had much sense of humour’, he wrote, ‘but then she did not have very much to laugh about.’ (p.288)

Oscar’s period as editor of The Woman’s World is of particular interest in relation to his support for women’s rights. Having taken over the failing publication in May 1887, he declared his intention of transforming it into a journal concerned ‘not merely with what women wear, but with what they think, and what they feel’ (p.160). His association with the magazine lasted little more than two years, but in that time he provided a platform for an impressive tally of predominantly female writers on a wide range of women’s issues. Contributors under his aegis included feminist activist Emily Faithfull, trade unionist Clementina Black, suffrage leader Millicent Garrett Fawcett and classical scholar Jane Ellen Harrison, while Irishwomen’s particular concerns were represented by Charlotte O’Connor Eccles on the working conditions of Dublin’s women weavers, and Lady Mary Catherine Ferguson on Alexandra College, Dublin, as well as by Jane Wilde herself, with articles on ‘Historic women’ and ‘Irish peasant tales’.

In aspiring to record the role of the ‘dozens’ (p.311) of women who interacted, some very briefly, with Wilde, the author has set herself a daunting task. The chapters dealing with Oscar’s early life are especially effective, and it is clear that the death of his younger sister, Isola, at the age of nine had a lasting impact – his ‘Requiescat’ was written in her memory, and a lock of her hair was found among his possessions after his death. While the subsequent narrative is at times clogged by biographical data on relatively minor personalities, the details of Wilde’s downfall, imprisonment and miserable final years, though familiar, are powerfully conveyed. Fitzsimons’s focus here is both on those friends who were supportive – most notably Ada Leverson, but also Adela Schuster, Helen Carew, widow of an Irish Nationalist MP, who funded the relocation of his remains to Pere Lachaise cemetery, and his sister-in-law Lily, who called on him in Paris just a few weeks before his death – and on those who drew away in condemnation or simply in embarrassment.

Wilde did, indeed, number some extraordinary women among his associates. Several of those mentioned here have already attracted their own biographers, and a number of others will doubtless do so in the future. The central story of Wilde himself, his development, spectacular success and equally spectacular fall, has been told many times, but Fitzsimons’s achievement in this lively and comprehensive, if occasionally over-long work, is to draw attention to the important role played by his female friends, associates – and, indeed, enemies – in Wilde’s life and in his writing, and in doing so to highlight his own involvement in the feminist debate of the period.