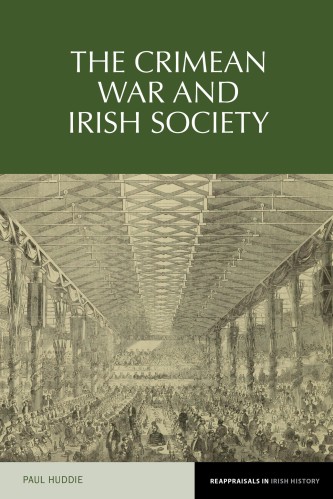 When I studied nineteenth century Irish history as an undergraduate student I had the impression that following the Irish Famine of the 1840s and early 1850s little else happened in Ireland until the Gaelic Revival in the 1880s. Indeed, it can be argued that in the past it was convenient to create a history time-line that seamlessly moved from the 1840s to the revival of Irish Nationalism in the late nineteenth century; a policy that was adopted in the new Free State to show how repressed we were under British rule. Paul Huddie’s new book The Crimean War and Irish Society looks at one long overlooked aspect of nineteenth century Irish history, the Crimean War and Ireland. In doing so, he not only shows that just as in England, Irish people were heavily engaged in the events of 1853-1856; but that the Crimean War also helped to shape future events in Ireland.

The book is divided into six sections: parliamentary responses, nationalist politics, popular response, religious response, Irish society and the military, and the economy. Each chapter takes a different area and examines the impact of the Crimean War on it.

Looking at the political scene in Ireland, Paul Huddie argues that Irish politicians were somewhat lethargic when it came to speaking on the progress of the war, with only brief discussions on specific Irish interests. In spite of the complex and fragile political system that existed in England at the time, the Irish Members of Parliament voted in favour of war. What is perhaps more interesting is the fact that unlike the events of the First World War when Irish people attempted to gain control of the country, this did not happen in the 1850s when England was at its most vulnerable, both politically and militarily. Paul Huddie gives a clear argument as to why this did not happen. Following the unsuccessful attempts by the Young Irelanders to gain Irish freedom in the late 1840s, coupled with the Irish famine many ardent nationalists had either been incarcerated, were keeping a low profile, had abandoned their principles, or had emigrated. While the Irish revolutionary clubs set up in America at this time posed a threat to the stability of the British government for a time. They fizzled out as the support base did not exist for the reasons mentioned above. The book also suggests that the improved economic situation in Ireland, caused by the ongoing war, meant that there was little appetite for renewing hostilities against the British. Irish farmers benefitted from the high demand for their produce by the British army. Traditionally it was this rural base that had rebelled against the English government.

The book also dispels some of the myths that surrounds the ending of the Great Famine including the idea that farming was slow to recover. Instead, as demand for Irish produce increased so too did the price received. Another interesting idea that emerges from this book is that the war helped to widen the Catholic middle-class base, which a generation or two later would become the advocates for a nationalist Ireland.

While on the surface Ireland was showing tacit support for England’s war in the east; including lavish farewell parties, parades, and extensive coverage in the news media. Ultimately much of this was a local affair, designed to see off the local army unit or the son of a prominent member of the community. This tacit support is clearly evident in the chapter on religious support for the war, where it is shown that religious tensions continued to exist. While the Catholic Church in Ireland continued to provide support for the war, they remained wary of the activities of the Protestant Church in Ireland, particularly when it came to the fundraising efforts. What comes to light in this book is that mid-nineteenth century Ireland is complex, with competing ideologies, part of the British Empire, but not fully committed to all of its ideals.

Paul Huddie has written an excellent account of a period that must of us know little about. He has combined his interest in understanding the Irish contribution to the Crimean War with an overview of Irish history in the mid-1850s. In doing so, he has shown that the Crimean War acted as a link between the past and the future. Indeed, the war it can be argued was responsible for shaping future events in Ireland. Paul’s style of writing ensures that this book is accessible for all. This book should also be recommended to undergraduate students as supplementary reading material on nineteenth century Irish history.

Martin Walsh is an independent historian interested in the social history of the late nineteenth century and twentieth century Ireland and England.