Ingenious Ireland: A County-by-County Exploration of Irish Mysteries and Marvels by Mary Mulvihill 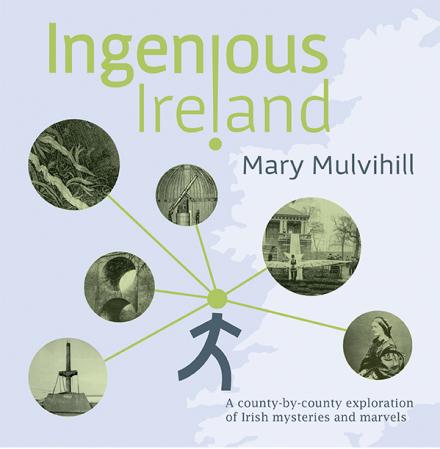 In c. 1740, Irish artist Susanna Drury made the first scientifically accurate drawings of the Giant’s Causeway. Engravings of her watercolours were sought after all over Europe, and ignited a fiery debate among geologists – whether the rock formations were caused by water or volcanic activity. Drury approached with a scientific eye something that had previously been the subject of myth and conjecture. Her originality found an echo in the 1990s when Mary Mulvihill (1959–2015) embarked on a crusade to restore women’s contributions to the history of Irish science and technology, giving new life to a fallow field. At the time, the history of science in Ireland was understudied, and women’s scientific achievements were largely ignored or treated as eccentricities.

Mary Mulvihill was a gifted science communicator. In 1990, she was a founding member of WITS – Women in Technology and Science, an advocacy and networking organisation. She made important contributions to identifying and recovering women’s roles in the history of Irish science and technology as editor of two books aimed at the general reader – Stars, Shells and Bluebells: Women Scientists and Pioneers (WITS, 1997) and Lab Coats and Lace: The Lives and Legacies of Inspiring Irish Women Scientists and Pioneers (WITS, 2009). Ingenious Ireland was first published in 2002, and this new edition contains a preface by Belfast-born astrophysicist Jocelyn Bell Burnell who, as a postgraduate researcher, discovered radio pulsars in 1967.

Arranged by region and county, this book is a place-history of natural wonders and resources, feats of engineering, and stories of individual contributions to scientific knowledge. These include a good proportion of women in the broad fields of science, technology, engineering, medicine and mathematics, in varying degrees of detail and with a strong emphasis on the nineteenth and twentieth centuries. Some readers will find many of the case studies predictable. Women in medicine and health include Kathleen Lynn and Dorothy Stopford Price; women astronomers are Margaret Lindsay Huggins, Agnes Clerke, and the ‘lady computers’ of Greenwich, Annie Maunder and Alice Everett; women in chemistry are Kathleen Lonsdale and Lucy Boole. The latter, and her mathematician sister Alicia, receive only a passing mention within a detailed outline of their father’s contributions to mathematics.

The book’s geographical organising principle falls short in terms of charting and exploring wider themes, such as Irish contributions to different branches of science, or the roles of and opportunities for women in the sciences over time. Arranging the material according to habitat, rather than by county lines, would tell a very different story. A focus on Ireland’s unique boglands, for example, would invite the story of Elizabeth Rawdon’s 1783 publication of the first-ever documented scientific investigation of a bog body find – also the first article published by a woman in the journal of the Royal Society of Antiquaries.

Similarly, a thematic focus on different branches of science would clarify for the general reader the circumstances that led so many women to specialise in botany and marine biology – fields that were deemed suitable for women, that could be pursued without much specialist equipment, and that depended on the tireless fieldwork of specimen collectors. Individual stories are told of women who made important contributions to these fields, but they are not presented in the context of the wider, international scientific community. These include pioneering lichen expert Matilda Knowles, who worked in the herbarium of the National Museum (now at the National Botanic Gardens); internationally recognised late-eighteenth century botanist Ellen Hutchins, whose collection mostly survives at Kew Gardens; respected marine biologist Annie Massy; jellyfish expert Maude Delap; and the naturalists Anne and Mary Ball, whose discoveries were attributed to their brother as per the conventions of mid-nineteenth century science publishing. However, science is never an individual endeavour, nor can it be confined to national boundaries. All of these women corresponded and cooperated with international colleagues and institutions, contributing to the advancement of scientific knowledge despite the lack of professional opportunities available to them. Few earned an independent income from science – with notable exceptions like Annie Maunder, Alice Everett and Kathleen Lonsdale – but the personal and professional barriers these women faced are only hinted at. The reader gets a fleeting glimpse into Maude Delap’s tenacity in persisting with her research in the face of her father’s declaration, when she was offered a position at Plymouth Marine Laboratory, “No daughter of mine will leave home, except as a married woman” (397). But that is not the objective of this book. It is not intended to be read cover-to-cover, but rather for the general reader to dip into at random and be surprised.

Unfortunately, there are some flaws in the presentation of this book. The index contains inconsistencies in the application of married and ‘maiden’ names, for example, and while the book is packed with illustrations, some are of very poor quality. The directory of visitors’ centres, museums and heritage sites – which provides telephone numbers but not website addresses – seems out-dated given the availability of up-to-date information online. These shortcomings aside, the book provides an engaging general introduction into the history of science in Ireland. Indeed, with its useful maps, Ingenious Ireland could serve as a touring guide, and as such may find new relevance in the context of our collective responsibility to reduce the CO2 emissions generated by air travel, by holidaying at home.

The first edition of Ingenious Ireland was very well received, and for it Mary Mulvihill was awarded Science and Technology Journalist of the Year in 2003. Perhaps new, updated compilations to pick up the mantle of Stars, Shells and Bluebells and Lab Coats and Lace – with improved titles less coded to an out-dated presentation of ‘femininity’ – would be a timely way to honour her legacy, particularly in the context of current concerns for girls’ participation rates in science and mathematics at Leaving Certificate level.